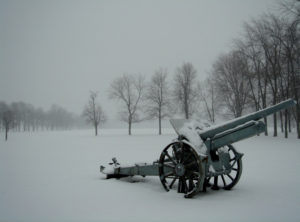 HISTORY OF THE VIMY GUN

For years this gun sat silently on the Common at Niagara-on-the-Lake. There was nothing to identify it as unusual or significant and people strolled by it every day, giving only a casual glance. As it turns out the gun was used by German Artillery to shell the men of the Canadian Corps in the days leading up to and during the battle of Vimy Ridge which took place April 9-12 1917. The gun, serial number 201 was captured by Canadian infantrymen of the 7th Battalion outside a small village called Farbus, a mile south of Vimy. A gas attack on the German gun crew, in combination with the muddy conditions of  the battle forced the German unit to abandon the 105 millimetre howitzer. This gun was quickly pressed into Canadian service and used to shell the retreating German units.

At the end of the War the Canadian government brought back to Canada hundreds of war trophies to be distributed to communities and organizations across the nation. The captured Vimy Gun was presented to the village of Queenston and stayed on display until a road realignment project forced its removal. For decades the gun remained on a local farm under the care of a retired member of the 57th Field Artillery Association. With his death the gun was stored behind a Parks Canada storage shed. The Gun was eventually placed at Butler’s Barracks, Niagara-on-the-Lake in conjunction with an agreement with Parks Canada. When the importance of this national treasure came to light, custodianship of this of the gun was entrusted to the care of The Lincoln and Welland Regiment Museum.

In 2009 volunteers with the Lincoln and Welland Regiment Museum moved the guns indoors for restoration. In partnership with the Garrison Community Council of Niagara, the restoration of the gun began in 2009. Upon examination of the Vimy Gun, it was determined that full restoration would be needed, including new wooden wheel spokes and extensive iron work, followed by sandblasting and painting. The Vimy gun was dismantled piece by piece in order to be properly assessed for restoration.

On April 7th 2017, the 100th anniversary of the start of the battle of Vimy Ridge, the fully restored Vimy Gun was unveiled to the public at Lake Street Armoury. It was through the dedication of our wonderful vehicle volunteers and the generosity of our sponsors that the Vimy Gun was restored. Thank you to all who donated to this project, your support has ensured that this piece of Canadian military history can be appreciated by future generations.

While we are in the process of building the Niagara Military Heritage Centre, the Vimy Gun will remain offsite in our vehicle collection. However, for those wanting to view our restored Vimy Gun, we will be bringing it to events we take part in throughout the year. 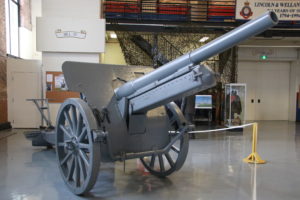